When I think about important works for brass quintets two albums come to mind right away. In part, because of the spectacular playing but more importantly because of the impact all of these works have had on the brass community. Most of the pieces performed on both of these albums have become standard repertoire for all up and coming brass players. For some, they are introductions to major works by living composers. For others, they give access to the music they may not have an opportunity to perform with a larger ensemble. 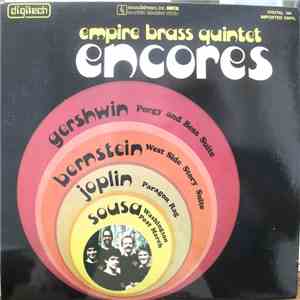 First is the album Encores by the Empire Brass Quintet. My first encounter with this album was in the form of a cassette tape as a highschool student. The two major works are the Suite From West Side Story by Leonard Bernstein arranged by Jack Gale, and the Suite From Porgy And Bess by George Gershwin again arranged by Jack Gale. Both of these pieces are substantial works and have become important arrangments for brass players since the release of this recording.

The other album, in my opinion, is New American Brass by the American Brass Quintet. All of the pieces on this recording have since been added as major works to be studied by brass quintet students. With pieces written by Robert Dennis (Blackbird Variations), David Sampson (Morning Music), Eric Ewazen (Colchester Fantasy), Bruce Adolphe (Triskelion), and David Snow (Dance Movements) this album feels like an extension of Encores in that it highlights American composers.